back to search results

Drug addicts smoke their daily heroin dose, probably the last of the afternon. Morgh Mandi, one of the most crowded place by the druggies in Rawalpindi. Pakistan, on thursday, August 14 2008....."Pakistan is one of the countries hardest hits by the narcotics abuse into the world, during the last years it is facing a dramatic crisis as it regards the heroin consumption. The Unodc (United Nations Office on Drugs and Crime) has reported a conspicuous decline in heroin production in Southeast Asia, while damage to a big expansion in Southwest Asia. Pakistan falls under the Golden Crescent, which is one of the two major illicit opium producing centres in Asia, situated in the mountain area at the borderline between Iran, Afghanistan and Pakistan itself. .During the last 20 years drug trafficking is flourishing in the Country. It is the key transit point for Afghan drugs, including heroin, opium, morphine, and hashish, bound for Western countries, the Arab states of the Persian Gulf and Africa..Hashish and heroin seem to be the preferred drugs prevalence among males in the age bracket of 15-45 years, women comprise only 3%. More then 5% of whole country's population (constituted by around 170 milion individuals), are regular heroin users, this abuse is conspicuous as more of an urban phenomenon. The substance is usually smoked or the smoke is inhaled, while small number of injection cases have begun to emerge in some few areas..Statistics say, drug addicts have six years of education. Heroin has been identified as the drug predominantly responsible for creating unrest in the society." 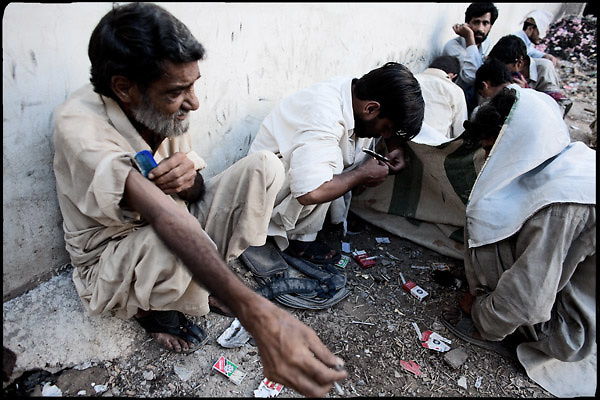